A hatch, but barely a catch! 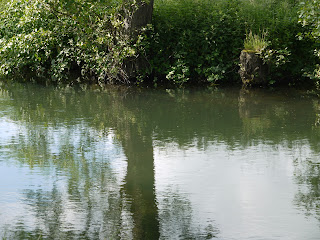 Dancing flies on the water, but no fish rising to them.Though I do remember Stuart Crofts writing about these 'River Dancers'. He suggests they are a caddis fly swarm and though fish may not be rising beneath them, the swarm itself is a bunch of males waiting for females. The natural jostling and competition creates casualties. So walk a little further downstream for the trout waiting for them.
Perhaps I should tie up some of his river dancers or silverhorn patterns and go out tomorrow evening? 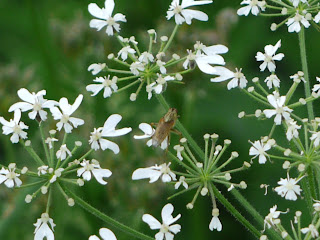 What is this red eyed beastie then? I was trying to photograph the sedges, but they moved on too quickly. Took a shot of this apparently ordinary fly and was quite surprised to see the colouration of the eyes when I saw it on the computer screen. So what is it?
Poachers on the Dove
Fished the Dove with my brother-in-law yesterday evening. The closest we came to a catch were 2 poachers though. The expected evening hatch and subsequent rise did not occur. The poachers were spinning of course so it didn't deter them. Though Gary shouted at them and whipped out his phone for the keeper, then gave chase. They had parked in the pub car park near Hanging Bridge in Ashbourne and fled almost as fast as Lathkill trout do, as you approach the river! He got a good look at them though and gave his description to the keeper.