River dancer it was!

So I took my own advice and tied up some of the River dancers which Stuart Crofts refers to as Soft-wing caddis, tan dancer.
I headed back to the river last night arriving about 6pm. The tall trees car park was full, with a group of chaps from Cromford flyfishers out on a fishing trip on the Wye. The day had been a bit mizzly and windy. But they were partaking of refreshments to carry on into the evening. My fly fishing source, Mr Worthy, had texted me that the rise wasn't starting until 9. So I passed on this info and said I would fish somewhere else, so they could divide that area up between them.
I went the other side of the Haddon Estate, downriver. I walked on down, peering at the river waiting for the rises. None came. Walked on. Tried a few casts, lost a few flies to the tree gods (they control the wind I think). Walked on down. Had a fish on and off in fast water.
Stayed on the right bank, as some of the trees have been cleared here. Spotted a rise, then another. All on the other side of the river of course. Roll casting a dry fly doesn't really work more than once, but hey ho. Managed to miss a take, so started heading back up the river for a better spot.
It was now after 9pm. I had a cup of tea and watched. There was the odd insect coming off. A very long bodied very delicate fly I noticed and various other types.
There was no apparent visible hatch of any great number, but the fish were rising - to my left, in front on the far side, to my right. I tied on a (Richard Ward) Non Descript Sedge, no takers. Then I tied on my tan river dancer, the soft-wing caddis. Cast to the rise to my left part way across the river and missed the take. Casting right across the river to the fast run with a number of rising fish, reach casting to the left, upriver, to increase my drift. Which brought me short a couple of times. Finally got it right - fish on.
When the fish goes down and doesn't show itself, you know it is a larger fish and likely a brown not a rainbow. I quickly moved upriver a few yards to clear the weed area that the fish had to come over. It tucked in once and I brought it round and clear. In with the net, then the fish splashed on seeing this. But got it safely in. Hooked perfectly on the river dancer.
Went further up river and hooked another on the same fly. It wasn't a fluke, Mr Crofts know his insect life very well.
The picture of the fly is shown here. Tying materials are on the River Fly diary page. I got the full instructions from a winter talk of Stuarts, hosted by the Grayling Society. They hold their winter meetings in Bakewell. If you haven't booked Mr Crofts for your club, I suggest you do. He is a mine of useful fishing information. 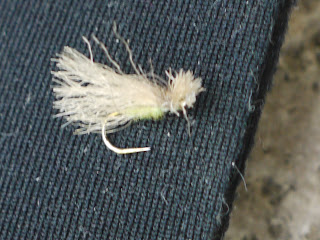