Silver on the Derbyshire Wye


The dull and frequently windy weather of late gave way to a sunny day yesterday, 17th December.
It was cold and clear; I wrapped up well and set off to the river.
I had been reading Fly fishing and fly tying and noticed a letter referring to a 5 bead tungsten nymph by John Tyzack in a 2003 edition of the mag. I had also looked at the ‘Fish On productions’ site (which features John Tyzack) and noted a nymph tied using a cdc feather to make it leggy and shrimpy. With no idea what the 5 bead nymph looked like I created a good sinking fly that I hoped would work. It did. I caught 2 grayling, a rainbow and an out of season small trout.
The tying details are on the 'River fly diary' page - Silver fly for a silver fish 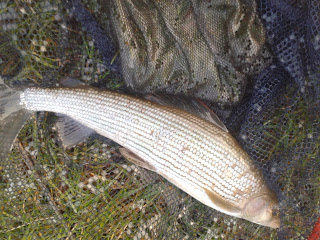 I was also trying a long leader. I had set up an extra reel already and left it at home!

So I quickly looped up a long length of 8lb line, a pink braid indicator and tied on a couple of flies. I use a figure of 8 loop to attach line to leader etc. For the dropper I use a ‘dropper loop’.
Having decorated a tree with the 2 flies I retied on using just one fly - which I cast and fish with much more confidently. At this point I almost gave up and went back to the car for the tenkara rod, which I find much easier for nymph fishing.
Then I tied on my silver fly and found fish.
Chris Worthy appeared and gave me one of his much more visible braid indicators which improved the situation further. Thanks Chris.
It took a little while to get used to casting with no fly line out of the rod tip. Fortunately the lack of wind and weight of the nymphs allowed me to develop a method of getting the fly to the river. As there is no wading, lifting the line at the end of its run and casting using the resistance on the water to load the rod only worked when casting close to the bank. Generally this was too close in and snagged in the edge growth.
Being a right hander on the left bank I held some of the slack to shorten the line, then swung the line behind with the rod across my left shoulder, (clear backspace needed) keeping an open loop (slight elipse on the rod tip) and returning the fly upriver, where it quickly sank.
Keep an eye on the fly and rod tip whilst you get used to casting. If you have any tips or web links to this casting let me know please!