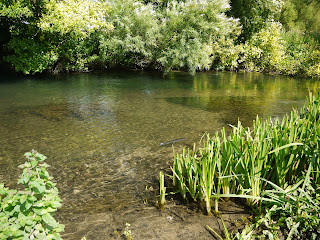 It's not often that a fish swims towards you on the clear water of the Derbyshire Wye. So I was puzzled when a large rainbow did exactly that. As I watched, it became clear it had a problem. 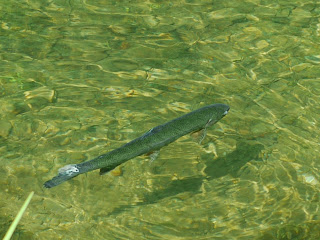 The top half of its tail had gone. The fish’s ability to manoeuvre was severely constricted. It was slowly swimming about in sunny open shallow water, facing downriver when I took these shots. 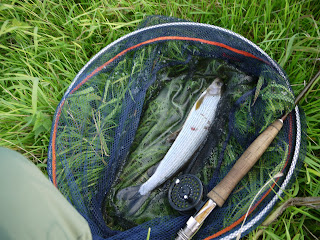 I had caught a grayling nearer the Rowsley stretch a few weeks ago, with distinct marks of a sawbill (Goosander or Merganser) on its flanks.
Whilst fishing the Manifold on Derbyshire CountyAngling Club water, a few years ago, walking along the high bank of this small waterway, I spotted 2 strange creatures swimming fast, together upriver. As I watched, wondering what kind of fish they could be, they suddenly emerged from the water and flew off!
The RSPB site gives excellent images and sounds of the Red-breasted Merganser and the Goosander.


What with mink, otters, osprey, sawbills, and poachers, it’s a surprise there are so many fish in the river.
The test for an apparently empty river is, of course, bread. I delighted my granddaughter on a visit to Rowsley Mill using a little bread saved from her lunch which she tossed into the river, just where the water comes out of the mill (no ducks here). We saw no fish until the second piece of bread. How many fish appeared from nowhere in seconds was amazing. Big fish they were too. Now dare I tie and use a white fly? Perhaps, but I would need to put on a stronger tippet.
Tight lines