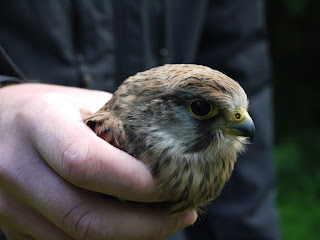 The wonderful thing about fishing is that it isn’t just about fishing. The Lathkill is a beautiful clear river, which, even after rain, runs clear. The other bonus is that there is no public access, which means that it is quiet and peaceful, the wildlife untroubled.
It was surprising though to see a hawk sitting on the stone wall close to the bridge and hut on the middle beat. I had starting setting up my fishing equipment, when I suddenly spotted it. I got out the camera, moving carefully, and took several shots of it. 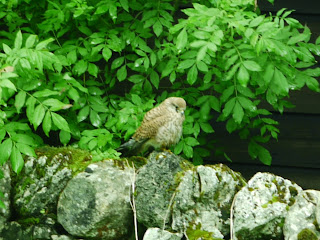 It sat there, watching me, moving its head just a little. Hmm, strange, I thought! Fishing in isolated spots I have had a hawk land on a dead tree above me, but it moved as soon as it realised I was there. This one was going nowhere. Clearly it had a problem.
Fortunately, river keeper Jan turned up. The bird still didn’t move. I pointed it out to Jan, who first couldn’t spot it, it being rather nearer than he expected. He recognised it as a Kestrel.
We had a discussion – should we leave it and let nature take its course, or should we intervene rather than leave it to starve to death slowly.
It had now started moving off the wall, but clearly could not fly. Was it wet and starving?
We should try and catch it was the decision.
So I armed Jan with my Tenkara extending landing net. Fortunately the landing net I use for the Peacock water has a very long handle, as there is no wading. Its length proved useful, as Jan gingerly and slowly raised the net toward the kestrel; now back up on a metal post on the wall. Amazingly as the net moved toward it, it jumped into the net!
Having placed it in a mink trap in the back of his car, Jan phoned Andy Heath of Trent Rivers Trust who has kept hawks. He was home, so off Jan went.
He phoned me later, by which time the bird was perched on the back of a chair in Andy’s kitchen being fed some chopped up mouse.
It had seemed very calm throughout its capture and as Jan carefully held it, I do wonder if it had already had human contact – or perhaps it was so hungry and exhausted it was beyond worrying!