Fly fishing is defined for me when fishing with a dry fly, but with the grayling season and winter weather ahead of us, it is time for me to try to fish deeper into the water.
The talk at the end of the season given by Glen Pointon at the club meeting at the Peacock, was, therefore, well timed. Glen demonstrated making his soft touch shrimp and talked about how to fish it, and the pros and cons of sub surface fishing. He also gave me a tungsten headed fly, which he said he will fish with through winter.
Armed with copies of this and my Tenkara rod, I headed out to the river. Nymph fishing is something I get a little impatient with as I usually cast too far to hold the fly in the current correctly. The Tenkara would prevent me doing this. Thus, I went to a fishy bit of water cast upstream, followed down and - fish on. Fish returned (unfortunately a rainbow not a grayling). I recast, and amazingly, another fish on. Gently bring in a grayling was Glen's advice; unfortunately I rushed it and lost it as I steered it to the net. But, hey ho, I was not complaining. 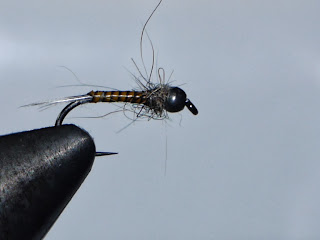 This is Glen's fly, you can see my copies of it and the materials used on the 'River fly diary' page.
Posted by IreneOs at 13:16