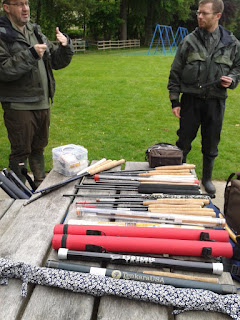 Choosing to attend a Tenkara tuition day on the last day of May would, I had hoped, been a summery event - but it was cold and windy - even with the sunshine. At least it didn't rain!
Paul Gaskell and John Pearson of Tenkara Centre were an entertaining and very informative duo. With John using a 10 metre leader on his rod, Paul played the part of the fish - not in the river of course. This amusing exercise explained how to handle a fish and, most importantly, bring it to the net. With no reel to wind in line, clearly a technique was needed.
We tried quite a few rods - and weren't they all very different. I had taken my old Stonefly tenkara rod, but decided to keep it hidden; aware that if I compared it to some of these I would find it wanting.
Unfortunately my free 'Mamushi Kebari' fly made from a piece of skin from a Japanese Pit Viper (Mamushi) is a little too heavy to use as a dry fly - so I will save it until the end of the trout season. I fish the 'dry fly only' stretch of the Derbyshire Wye. No wading, dry fly only - saves a lot of baggage whilst fishing!
I did not buy a rod but I did buy a 4.5m dry fly leader; the Fujino tenkara midi, a tapered leader. I tried it on the river Bradford on 4th June. The 4th of June was that very hot day last week. After the cold spell we have been through I am sure most of us noticed it.
The mayfly were not very apparent during the morning. My casting, initially, was a little erratic, but I gently got a grip on it. In fact I arrived at the river with the new leader on and then struggled to remember the knot required to hold the tippet against the stop knot I had tied. Finally my visual memory kicked in as I remembered John's demo of tying a Palomar knot which you can check out on the video link - 3rd video down the page.
It cast much better than the loop I had been forced to cast with until I remembered the correct knot. I don't suppose this system would work with a fly line would it?
Having finally got the set up and casting a little better I did proceed to catch fish and bring them in on the long leader, applying the method we had been shown at the tuition day. The video is somewhere on the Tenkara Centre site too.
Unfortunately one of the larger fish had not seen the video - it shot off across the river, I lowered the rod to the side and successfully turned the fish round, and unfortunately it was clearly disgusted at this manoeuvring and quickly did a back flip and broke off the fly.
Standing on the footpath on the Bradford chatting to a chap, for quite sometime actually - which proved extremely productive - we were watching probably more than a dozen fish, the large fish chasing off the competition (the clarity of the Bradford water is fantastic), watching the mayfly and other emergers coming up through the water and the fish following them up. In fact standing so long the mayfly spinners came back - dipping like wagtails well above the water.
Intermittently I cast, and then, quite casually, the biggest fish we had been admiring, sauntered over to the Philip White dry emerger and took it! I took a very deep breath awaiting the explosion as I lifted the rod... the fish held it tightly..  for quite a few moments...  then... flipped it out... to my great relief.
I flicked the hook and line back, took hold of the fly, which immediately dropped off the tippet into my hand......
Clever fish those River Bradford trout!