If it wasn’t for the wind –


-  it might just feel like summer! After just 2 days of relatively warmer weather the blossom is bursting on the leafless branches. 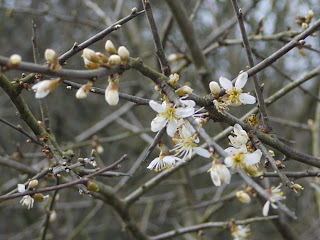 I saw 3 butterflies on Monday, despite that strong yet warm wind. The small tortoiseshell sat basking in the sun. If it was waiting for the wind to soften, it was out of luck. 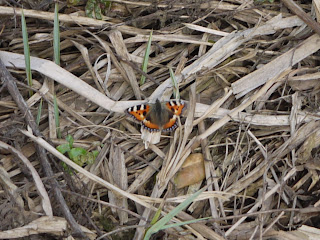 Also came upon an empty egg shell. Had the chick hatched? Or had it been eaten by the stoat I saw running along the opposite bank? 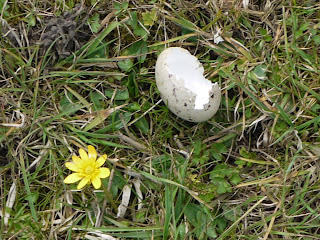 Having arrived at the river a little late to see a fly hatch in any numbers, a variety of flies were tried.

Fishing in fast currents and a strong wind meant I missed quite a few takes. Had trouble keeping fish on too. This may have been caused by the takes sometimes being downstream of me.
An experimental dry fly finally got tied on. I like to try these when I know there are fish about and approximately where they are, so I can test it. It was a sparkly little thing, so I guessed the rainbows would like it. One certainly did, it moved across the river to it. Unfortunately as I changed position to grab the net it removed itself from the hook. The tree above caught the fly a few moments later – it didn’t let go. I have put a photo and description of the fly on the ‘River fly’ page, under the name Polyprop glitter bug.
Fortunately ‘Dry fly expert’ blogger, Richard turned up at this point and suggested casting from the left shoulder, which neatly avoided the tree!
Yes Richard, I eventually caught and netted a fish. A grayling on a dry gold ribbed hares ear.