One swallow doesn't make a summer 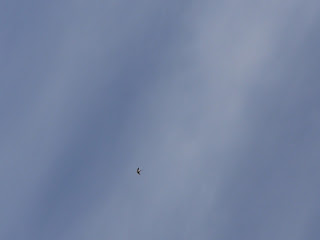 Well I have certainly seen more than one swallow whilst fishing, but they are staying quite high. No startling swoops along the river yet. In fact I have only fished on one day that was not very windy this whole trout season. That was the day that I saw the bunch of D of E lads on the bank of the Lathkill. Where there is no footpath. A quick phone call to Jan the river keeper showed nothing official taking place. So I headed down to speak to them. Clearly they were lost. As I got out of the car they picked up their bags. Their route would meet mine at the bridge. They started rushing. They dashed through the gate (new gate no stile now) leaving it open. They scuttled about like blind sheep between the fence and quite high wall. At this point I hollered at them to shut the gate. One ran back to do so. He was the one I met up with at the bridge. "Whats their problem" I said to him as his group ran off away from me (I am a 5' 3" female - wow, really frightening) rucksacs and arms flying as they ran down the lane and off over the wall into the field. What a sight! It turned out they were supposed to be going to Bakewell. The exact opposite route they were running. Clearly they had a guilty conscience about something they had been doing. Just such a shame I hadn't got the camera. 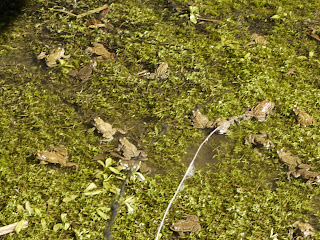 The toads are congregating. Out of the wind chill under a bridge they seemed happy enough. Though possibly not so for the one I saw floating down the river, feebly attempting to navigate whilst being swept down in the current. I think that one will have missed the party!