Climbing in Yorkshire and no fly fishing

Expecting the heat of summer to break once the school kids started their summer break, we decided to take a trip to Yorkshire before school finished. Not to fly fish - but to do some walking.
Unfortunately schools finished on the Wednesday not Friday and the weather (of course) broke. We thus found ourselves wandering around Malham Cove in the rain! It was, at this point still reasonably warm, unlike the following two days!
The scenery was still fabulous. We walked from Malham Cove up to Malham Tarn and back via a limestone gorge that was so long I couldn't even get it into a panorama picture.
Continuing along the top edge to the further end, we then found ourselves descending steeply on damp rocks. The rain had lifted but left our descent a little slippy. Part way down we met a young lad and his father coming up. "Were we aware it becomes a bit of a climb down the waterfall further down?" said the dad. Oh, said husband Mike. "Are there plenty of hand holds?" "Yesss, plenty" came the reply. Well his son couldn't have been more than 10 so I thought it should be within my ability and physical stretch. I do not enjoy climbing, but we had already come quite a distance!
Going further down to a plateau formed behind one of the waterfalls we came upon a group of Germans who had just climbed the waterfall. "Oooh, it is DANGEROUS" said a very tall guy. Huh, think I, we have followed German guide books abroad that warned us of precipitous and dangerous drops on walks before - only to find no problem at all. Just exaggerating thinks me.
So on we went, trying to keep to the dryer bits - which soon ran out.... as we were in pools of water picking our way round.
Then we arrived at a sudden view down. Children splashing in the water, people looking up at us. Too late to turn back. I had already had a small scream as I wobbled across one rock. Mike then advised me to face the rock, rather than come down backwards. Amazingly I had realised the same thing at that very point.
Suffice it to say that the very steep bouldery climb down - with almost enough hand and foot holds - made me feel very hot and nervous. Our descent seemed slow - but perhaps terror made time stand still? I found comfort in the fact that the smoothness of the top of the hand holds meant we were choosing the correct route down - which swung this way and that as we traversed and descended. 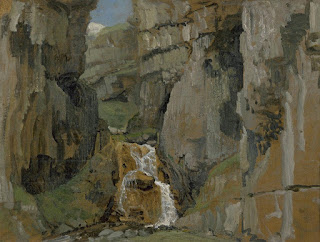 This painting (actually preliminary sketch) by James Ward in 1811 gives a picture of our descent. I was pleased I had not turned back - but I would not do it again!
My reward came later as our walk continued past a much smaller waterfall. In the pool of which, were many, many trout. 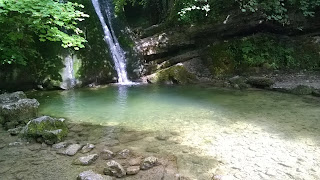 As we watched, there must have been a short hatch - as suddenly four or five trout rose to take something from the surface - then, just as quickly, stopped.
Very pleasant. Even the sun shone strongly for those few minutes we stood there.
And, as the sun has now come out now we are home, I think it is time to head to the river to see if the fish are rising in Derbyshire.
Tight lines